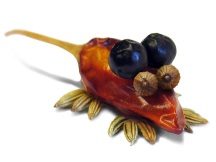 Soon after Harolds Club opened in Reno, the main attraction, for only about a week, was mouse roulette, “where customers bet their small change on what color or number a scampering rodent would choose to rest up from his running,” wrote Robert Laxalt in Nevada: A History.

In his book, I Want to Quit Winners, Harold S. Smith, Sr., one of the club’s co-owners, recalled that he’d returned to Reno from a business trip and found mouse roulette being offered in his very own casino, featuring gray mice caught in the attic. The media picked up the story, erroneously reporting the club used white mice.

“Harolds Club suddenly had an international reputation as the casino that ‘started from a mouse roulette game.’ Twenty-five years later, people still ask to see the game and won’t believe it was here only a week,” he wrote.