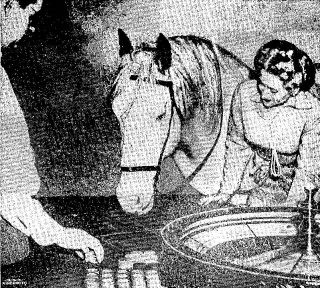 Lucky, the horse, and its owner, Susan Wallace, play roulette at the Club Cal-Neva in Reno, Nevada

In early January, she sent telegrams to the casinos in Reno, Nevada — Harolds Club, Harrah’s Club, Bank Club, Club Cal-Neva, Palace Club, Riverside hotel — asking if they’d be amenable to horse roulette and if their casino could accommodate a horse and its size.

Unlike rat roulette, where the rodents are part of the gambling equipment, equine roulette involves a horse actually playing the game . . . well, with a bit of help.

Wallace would be in The Biggest Little City in a few days, she informed them, and wanted her white stallion — which she’d named Lucky because of his past gambling success — to play roulette with her there.

“‘Lucky,’ the horse, has never been known to draw to a soft 17 or crapped out in a friendly game in the stables among his buddies or in any flourishing casino,” reported the Nevada State Journal (Jan. 5, 1950).

Varied Responses
Three clubs replied via Western Union. A Harolds Club official asked how old Lucky was, noting the legal age for gambling was 21. Well, whew!  Lucky was eight in horse years, which was said to be equivalent to about age 32 in a human, so he was legal.

Ed Dowd of the Riverside Hotel told Wallace he wanted to host her and Lucky when the property expansion, in progress at the time, was done.

The Club Cal-Neva was the only casino to extend an invitation. It was through the manager Morrey Brodsky with this dispatch: “‘Under due consideration, Club Cal- Neva extends to you and your horse ‘Lucky’ all our gambling courtesies and privileges heretofore known only to man. Please be advised gaming limits and house policy must be adhered to. May the best animal win. Please advise your date of arrival. Regards’” (Nevada State Journal, Jan. 8, 1950).

Raising Awareness
Four days later, upon her arrival with Lucky, Wallace informed the press that a group of Los Angeles men, who believed in Lucky’s gambling acumen and Wallace’s singing ability, had given her $10,000 (nearly $1 million today) for the trip and gambling. A percentage of her and Lucky’s winnings would be hers to use for operatic training. She said she planned to stay in Reno as long as her money lasted or until she won a certain, undisclosed amount.

Whinnying at Roulette
On the 8th, the Homo Sapien-Equus duo hoofed it over to the Club Cal-Neva where they engaged in Lucky’s favorite game of chance. To play, Wallace would extend a silver dollar, which Lucky would grasp between his teeth. He’d move his head back and forth along the numbers and drop the coin on one of them. For each wheel turn, he’d select three numbers, and Wallace would bet on the same ones.

“Tourists raised their eyebrows and were quite surprised but most Reno residents dismissed the entire affair as one of those things they had to contend with,” noted the Nevada State Journal (Jan. 10, 1950).

On the second day, Wallace admitted gambling with Lucky was a publicity stunt to further her singing career, either with her winnings or from a well-paying singing job that might result from the press coverage.

After three days of play, the two were up by $600. The subsequent day they lost, but Wallace wouldn’t say by how much.

Media Go Silent
How the woman and horse fared subsequently or how long they were in Reno weren’t reported. Could this mean they stopped playing that day and left town soon after? Or did they perhaps lose the whole $10 grand before returning home?