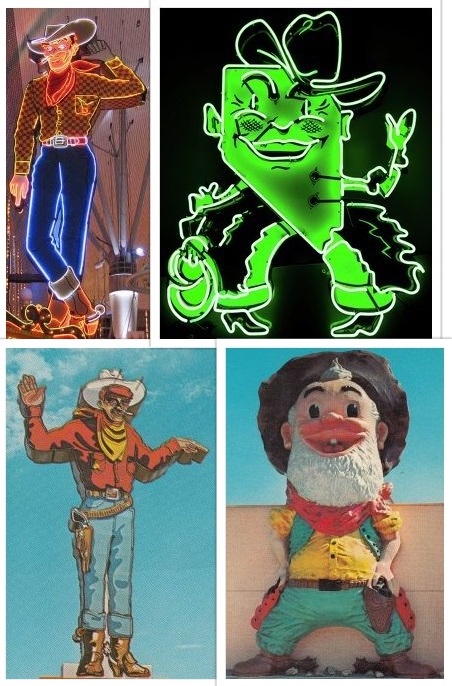 They’re one of a kind. Dazzling. Captivating. Iconic. Pure Nevada.

They’re the mascots of the state’s gambling industry. They graced the facades of casinos in the gambling meccas, and some still do. Rather than merely signs, they’re like citizens, but atypical ones — larger, brighter and cartoony.

Here’s a look at four of them:

The 40-foot-tall cowboy resulted from an advertising campaign the Walter J. Thompson firm launched in 1946 that boasted “fun in the sun” and a smiling cowboy whose thumb directed toward Las Vegas. The ads appeared in Esquire, the Saturday Evening Post and other national magazines. A year later, a different agency personified in print the Western figure with the name, Vegas Vic, and a voice saying, “Howdy, pardner.”

In 1951, artist Pat Denner designed the Vegas Vic who’s become the icon, and the Young Electric Sign Company manufactured a neon version of him for the Pioneer Club. The cost was $90,000 (about $835,000 today). For the more than half-century since, Vic has remained at 25 E. Fremont Street, greeting passersby with “Howdy pardner, welcome to downtown Las Vegas.” He even gave an interview to the Las Vegas Sun in 2000.

After Vegas Vic, in 1952, the team of Denner and the Young Company, created Wendover Will, another cowboy but much taller at 63 feet, for the State Line Casino in Wendover. Named after the border locale and the casino’s founder, William Smith, the neon mascot’s job was to lure travelers off of U.S. Highways 40 and 50 (today, Interstate 80) and into the gambling club/hotel/café/bar.

In 2001, when the casino’s ownership changed to the Wendover Nugget, 9-ton Wendover Will was donated to the city. He was restored and relocated to Wendover Boulevard in the heart of town, now West Wendover, where he stands today.

In the 1940s, caricaturist and commercial artist, Lewis “Lew” Hymers, designed Bucky, aka Nevada Bob, yet another cowboy but this one in the shape of Nevada.

Three or four versions were built, which hung on the marquee in the front and back of the Nevada Club at 224 N. Virginia Street. One of the Buckys, owned now by Will Durham, founder of the Nevada Neon Project, is 9 feet high and 7 feet long.

Unlike many of the neon signs manufactured in Nevada at the time, Bucky Buckaroo was made out of porcelain enamel rather than being painted, which helps it “look pristine,” Durham said. It’s impressive for 70 year old.

To construct him, workers first used structural angle iron to create his frame then covered it with chicken wire. Next, they applied many, many, many layers of papier mâché followed by two coats of celastic. Lastly, they painted and sprayed Last Chance Joe with plastic.

Once completed, they shipped him in three parts on a Southern Pacific flatcar to Sparks, where he was installed outside of Dick Graves’ Nugget for the 1958 grand opening.

Today, Last Chance Joe can be seen outside of the Sparks Heritage Museum at 814 Victorian Avenue.

Ever-Lasting Symbols
Whether in an original or new location, these vibrant, fun characters, along with many of their peers, endure as symbols — of a U.S. industry once unique to Nevada, gambling, and in turn, of the state’s historic identity. As well, today these icons boast the well-deserved label, Americana.

Photo of Bucky Buckaroo by Brian Ball, I Shoot Reno