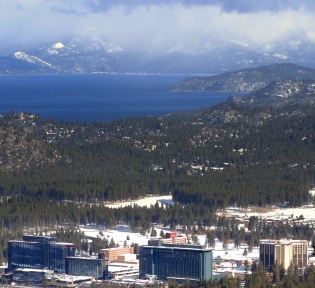 Casinos at Lake Tahoe in Stateline, Nevada, decades later, in 2008

Clarence Thayer grew ill with flu-like symptoms on Thanksgiving Day in 1958 while visiting his sister in Oakland, California. He was a well drilling contractor who lived in South Lake Tahoe. He and his wife Norma also owned a dry cleaning business that adjoined their home, which she ran and where he sometimes worked.

After an Oakland physician treated the 38 year old, he and his wife returned home. Soon after, he again got sick and sought care locally. When he failed to improve, he was admitted to Carson City Hospital, where he grew worse. He then was transferred to the Veterans Hospital in Reno, where he died on December 10 from what his physicians had diagnosed as pneumonia.

His mother, Lillie Thayer, requested an autopsy be done, and his widow agreed. That examination revealed the deceased’s kidney, liver and brain to be saturated with arsenic! Thus, the forensic toxicologist determined cause of death to be poisoning in small quantities over an extensive time period.

In interviewing Thayer’s mom Lillie, a 76-year-old former registered nurse, he learned she’d suspected her son was being poisoned for some time and that’s why she requested the autopsy. In separate conversations, she’d shared her suspicion with Norma who “didn’t say anything” and Thayer (Oakland Tribune, Jan. 4, 1959).

Carlson discovered Thayer never had told any of his treating physicians about the poisoning possibility, and it’s unclear why he hadn’t. He had, though, complained to a Lake Tahoe doctor as much as a year earlier about symptoms like the ones that resulted in his death.

In the Thayers’ dry cleaning establishment, Carlson found a few bottles and one mysterious Mason jar containing cherry soda and some jars of root beer concentrate — all tainted with arsenic.

More Details Emerge
During a lie detector test, the housekeeper, Mary Dalhoff, admitted to having taken about 15 bottles of the cherry soda to the dry cleaning business and placing them in the storage room. As far as she knew, she said, they were unadulterated at the time. She’d obtained them from the casino bar at Harrah’s Lake Tahoe, in Stateline, Nevada, on the south shore.

She denied knowing anything about the Mason jar or the concentrate. The results of Dahloff and her husband’s polygraph exams were “satisfactory” (Reno Evening Gazette, Jan. 26, 1959).

During Norma’s lie detector test, she said she’d moved the soda to keep it from freezing and after doing so, had seen her husband drink bottles of it from time to time.

While the news media never reported the outcomes of widow Norma and mother Lillie’s polygraphs, presumably they showed no deception or were inconclusive because no arrests were made … ever.