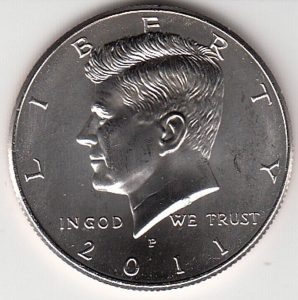 The U.S. suffered a shortage of coins in 1965. And that led to decreased business for Nevada’s largest industry — gambling. Usage of half-dollars, common in casinos then for table games and one-armed bandits, experienced the biggest hit.

That year, silver supply was scarce and its price high, at $1.29 per ounce. At $1.38, it would’ve become profitable to melt coins for their silver content, a situation the U.S. Treasury feared. Another concern was running out of the metal for currency. To counteract these problems, President Lyndon B. Johnson signed The Coinage Act, which reduced the 90 percent silver content of three national coins:

Consequently, people hoarded the coins. This, along with the growth in vending machines, collecting and economic activity, led to the shortage. Half-dollars were affected significantly, as often they were needed for juke boxes, newspaper stands, Laundromats, parking lot ticket machines, parking meters, payphones and bus fare. Additionally, many Americans desired to own the commemorative half-dollar showcasing President John F. Kennedy, minting of which had begun the prior year.

Desperate Measures
Nevada had to take action quickly to ensure gambling stayed as busy as possible. So the legislature approved a law allowing for use of Nevada Gaming Commission (NGC)-approved tokens in casinos. Then the Nevada Gaming Control Board (NGCB) drafted regulations and requested their passage “under emergency provisions for the immediate preservation of the good order and general welfare of the state and the gaming industry,” as noted in the Reno Evening Gazette (Aug. 18, 1965).

The NGC approved those rules, allowing casino patrons to use metal tokens in slot machines and plastic or paper chips of less than $1 value on gambling tables. The tokens, however, had to be:

Also, casinos couldn’t redeem tokens that weren’t their own unless a player received them from a payout on their property.

With those changes, stability soon returned to the Silver State’s gaming sector.