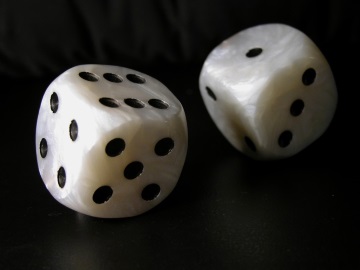 Signature: Barbudi, easy to play, features miniature dice. Because the odds for the shooter and fader are 50 percent, payouts can be ample when played outside of a casino or club, as the house doesn’t take a cut.

Origination: This dice game originated in the Middle East.

How It Works: Each player throws a die. The one with the highest number becomes the shooter, and the player to his right becomes the fader. Play rotates counterclockwise.

If the fader chooses to wager, he/she puts up a stake. The shooter matches part or all of the bet, and the other players, in turn, may cover what is left or make side bets with one another as to who, the fader or shooter, will win.  The shooter or fader may decide not to bet at all; if that happens, the dice are passed to the next players.

Trivia: In 1965, barbudi was introduced to Reno, Nevada by the Barboot Coffee House and Casino, which was given the first gambling license for the game in Northern Nevada. However, the enterprise lasted only a few weeks because the game didn’t catch on.

Current Status: Barbudi, common among certain ethnic groups such as Greeks and Turks, is played in Eastern Europe, Mexico, Canada and the United States. In some regions, it’s called even-up craps.