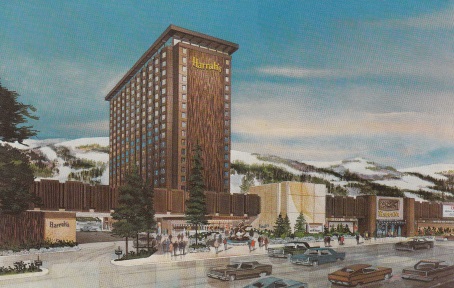 Ladies and gentlemen, the story you are about to read is true. No names have been changed, as there were no innocents.

This is the city, Stateline, Nevada. It’s the gambling mecca of Lake Tahoe. Most people visit it to recreate, but some go there to commit a crime.

Douglas County sheriffs were working the late shift when they got the call. At 10:40 p.m., five employees at Harrah’s hotel-casino were making a routine money transfer from the basement to the casino floor when an armed man stopped them on the stairs and shouted, “Give me the money, or I’ll blow your heads off.”

The suspect was described as roughly 5 feet 8 inches tall, 170 pounds, stocky, in his 30s, long haired and wearing dark glasses, a cowboy hat pulled down over his eyes and possibly a fake beard. His weapon was a .45-caliber automatic Colt pistol.

He grabbed the two bags from the workers, ordered them to back off and fled through the casino and out the door into the dark. He purposely dropped the bag containing chips, $4,500’s worth, ran about two blocks and crossed Highway 50 and then the state line into California.

At a nearby motel, he hopped on a motorcycle, whose rider had been waiting for him. The bike didn’t start, again and again. The two dismounted, pushed it, finally got it going, jumped on and rode off.

The thief had stolen $178,500 ($1 million today), at that time the largest robbery ever involving a Nevada casino.

Quartet of Suspects
The crime became a Federal Bureau of Investigation (FBI) matter when the stickup man crossed state lines. Investigators had the motorcycle’s license plate, captured by a witness, to go on as well as possibly the testimony of an informant, Barbara White, who’d been in on the planning of the crime but had backed out before execution.

Agents found $125,000 of the stolen money, the wig, beard and gun buried shallowly in the backyard of the motorcycle driver. Four days after the crime, they arrested:

The FBI tagged Rice as the stickup man; Swinburg, the getaway driver; and the other two, lookouts, one inside and one outside the casino.

The four faced federal charges of conspiracy and transporting stolen goods across state lines, and all but Rice, with aiding and abetting. State charges were conspiracy to commit armed robbery and robbery. Bail, mandated by federal and state courts, totaled $125,000 or $150,000 for each suspect.

One Turns Against Others
Legal wrangling began, with defense attorneys filing numerous motions, asking for separate trials, change of venue and more, all of which the judge denied.

The suspects were found guilty and were sentenced, in federal (1972) and state (1973) courts, respectively, to:

An Unexpected Twist
Later in 1973, Douglas County sheriff’s deputies recovered what they believed to be the remaining $52,000 from the Harrah’s heist a year earlier.

When investigating an armed robbery of the people living in Rice’s former house in Stateline, officers zeroed in on four suspects, all South Lake Tahoe residents, and found the cash.

“Authorities did not disclose the evidence to support the statement the money might be part of the Harrah’s loot, nor would they say how much was reported taken in the Rice residence robbery,” reported the Nevada State Journal (Sept. 8, 1973).