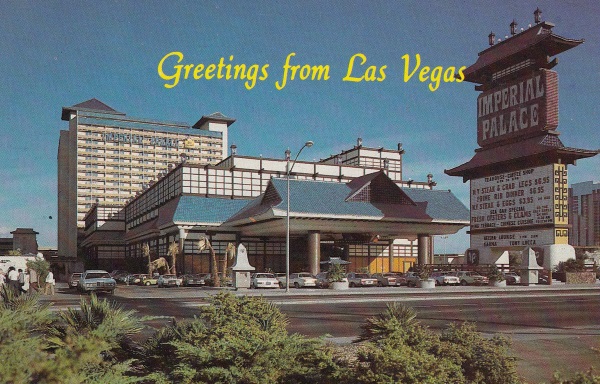 Tipped off by the contents of various lawsuits and complaints by employees, Nevada Gaming Control Board (NGCB) agents raided the Imperial Palace Hotel and Casino* on September 27, 1988. The 2,700-room property located on the Las Vegas Strip was owned by Ralph Engelstad, then age 58.

Shocking Cache Revealed
Inside the resort with the Asian motif, gaming investigators discovered a private space containing a multimillion-dollar horde of Nazi memorabilia. The room was 3,000 square feet in size, or about nine times the size of the average U.S. hotel room. The myriad of items in this “War Room” included:

• Murals depicting Adolph Hitler and Nazi staff members
• Daggers and swastikas
• A painting of Engelstad donning a Nazi uniform
• A life-sized portrait of Hitler signed, “To Ralphie from Adolph, 1939”

NGCB members investigated further to determine whether or not to recommend the Nevada Gaming Commission (NGC) revoke Engelstad’s gambling license.

The agents interviewed numerous current and past employees and reviewed legal documents. They revealed that the work environment at the Imperial was one, allegedly, where discrimination against Jews took place in the form of Engelstad making anti-Semitic comments and calling people pejoratives.

Workers revealed that Engelstad had thrown two parties, one in 1986 and a second in 1988, to celebrate Hitler’s birthday (April 20). Some staff members reported having felt pressured to attend the fêtes held in the War Room, which featured a large swastika cake bearing Hitler’s name, German food and marching music, and bartenders wearing T-shirts that read, “Adolph Hitler European Tour 1939-45.” One employee of Jewish heritage recalled Engelstad allegedly egging him on to cut the cake.

The NGCB also was alerted to the existence of bumper stickers at the Imperial, bearing the words, “Hitler Was Right.” When agents searched for them in the hotel-casino on October 6, instead of locating the decals, they found a printing plate for manufacturing them along with a 1986 order for the same.

Owner’s Explanation
Two days later, Engelstad apologized publicly for having the collection, which was in “poor taste,” he said, and for throwing the “stupid and insensitive” parties (Las Vegas Strip History). He denounced Hitler, denied being a Nazi sympathizer and refuted being behind the making of the T-shirts and bumper stickers.

Various subsequent media reports noted Engelstad or his attorneys had given, at different times, these justifications for the parties:

They were merely “spoofs” to celebrate new purchases for his historic ensemble (Salon, March 8, 2001)

Specifically, a representative from the Jewish Federation of Las Vegas responded, saying Engelstad’s mea culpa was insufficient and declared a boycott of the Imperial Palace.

From the viewpoint of the gaming authorities, Engelstad, with his blatant, seeming salute to the Nazi Regime and its anti-Semitic and racist views, at least, had disgraced the State of Nevada by embarrassing its casino industry. And that warranted punishment.

“The charge was honoring and glorifying Hitler,” said Gerald Cunningham, NGCB member. “It was an improper act” (The New York Times, April 3, 1989).

The Penal Phase
At the conclusion of the five-month inquiry, in February 1989, the NGC ordered Engelstad to pay $1.5 million (about $3 million today) — the second largest fine the agency had imposed on a casino operator as of that date** — and placed nine restrictions on his gambling license.

Nearly having been stripped of the same, the Imperial owner paid the full amount, removed the Nazi artifacts from the resort and vowed to refrain from holding further celebrations of Hitler.

Engelstad would go on to keep his gaming permit and own/operate the hotel-casino until his death in 2002.

* Before Ralph Engelstad debuted it as the Imperial Palace in 1979, the property had been the Flamingo Capri (3535 S. Las Vegas Boulevard). He’d purchased the dilapidated Flamingo Capri in 1971, spruced it up, added a casino and some buildings, and reopened it the following year. Today, a renovated version, the Linq hotel-casino and shopping promenade, stands in its place.

** The largest pre-1988 fine was $3 million levied in 1984 against the Stardust hotel-casino owners for skimming.