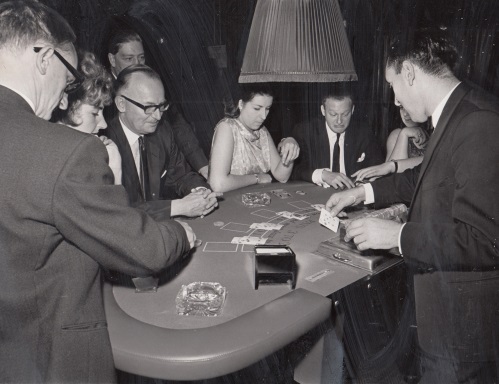 Gambling inside the Knightsbridge Sporting Club in London, England in 1965

“Next time try London. The odds are better,” boasted a sign in the McCarran International Airport in Las Vegas in 1976. The posting of this ad and possibly others resulted from an agreement between gambling industry representatives in London and Las Vegas to “swap promotions and high roller lists” (Las Vegas Sun, Oct. 15, 1976).

People playing games of chance in Nevada, however, would’ve found doing so in England quite different and vice versa, as many of the rules concerning casinos were diametrical.

Conservative v. Liberal?
Some might argue that England took a more conservative approach to the industry, with tighter restrictions, than Nevada. The U.K. admittedly had adopted more stringent laws in 1968 after a number of unsavory individuals had infiltrated gaming. Those changes led to a large drop in the number of existing casinos.

Nevada, too, had taken steps to gain better control of the industry, for example, forming two regulatory agencies — the Nevada Gaming Control Board (1955) and Nevada Gambling Commission (1959) — and instituting the Black Book (1960).

Here’s a snapshot of the gambling laws of the two jurisdictions in the 1970s.  When you compare them, what do you think?